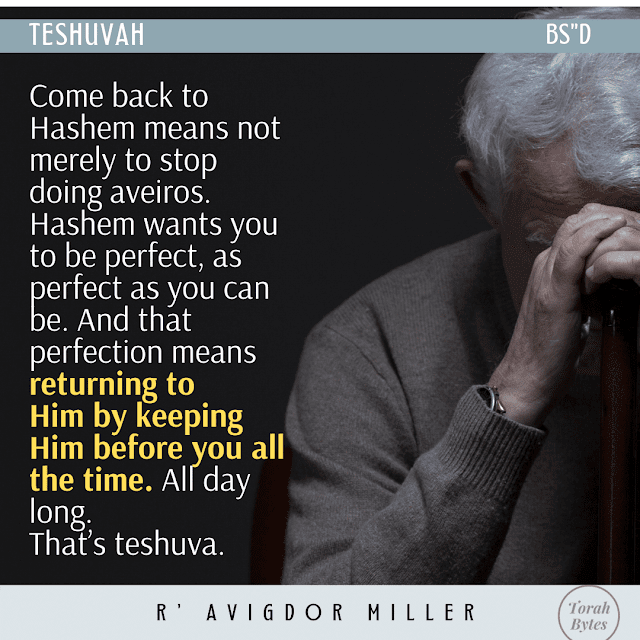 Q:
In some seforim they make it sound like doing teshuva is not so hard. It’s a process, but it’s not so hard. But in other seforim it says that it’s a big avodah of changing who you are completely. What’s the truth?

A:
In order to explain that, we have to ask: What does teshuva mean? What are you returning to? There are two kinds of teshuva. In order to repent for your sins, there are some minimal requirements that you must be aware of, certain things that you must do, and then you have fulfilled the mitzvah of doing teshuva for that sin. You have to have charata, regret for your sins. Then you have to resolve that you won’t return to those sins. You also have to have קבלה על העתיד, a resolve to forsake your evil ways. And you also have to ask Hashem for mechila, and you have to say vidui. Now, these are not very simple matters, but when you do these things properly you have fulfilled the basic requirements of of teshuva.

But there is another teshuva, a much more difficult teshuva and a much higher teshuva. And that is שובה ישראל עד השם אלקיך – Come all the way back to Hashem. Not just to “do teshuva” but to actually come back to Hashem. That is the real teshuva that Hashem wants from you. And that teshuva is endless. The pursuit of shleimus, the perfection of trying to get close to Hakodosh Boruch Hu, is a life long endeavor. Moshe Rabeinu tried all his life; and although he succeeded enormously, nevertheless he didn’t fully succeed. Nobody can succeed completely. שובה ישראל עד השם – Come back to Hashem means not merely to stop doing aveiros. Hashem wants you to be perfect, as perfect as you can be. And that perfection means returning to Him by keeping Him before you all the time. All day long. That’s teshuva.

All your life you must strive for more and more perfection. And it’s a chiyuv, an obligation! Hashem says to us ומי יתן והיה לבבם זה ליראה אותי כל הימים – If only their hearts would remain this way always when they recognized My Presence (Devarim 5:26). Hashem wants from us that same attitude that we had at Matan Torah when they heard the voice of Hashem. It was tremendous! Everyone was overwhelmed by the dvar Hashem at Har Sinai. The voice of Hashem! And Hashem said, “I want it to be that way always!” How could it always be that way?! That’s a very difficult avodah; it’s a teshuva that involves coming back to constant awareness of Hashem.

So real teshuva, the teshuva sheleima, is a very real undertaking because there’s a lot of work to do to achieve that attitude of feeling the presence of Hashem always. But it’s an attitude that all of you can achieve. It just takes work. All our lives we have to strive to do the best we can by constantly seeking more and more shleimus, by coming back to Hashem as much as possible. The more you think about Hashem, the more you are coming back to Him in real teshuva.
TAPE # E-199 (August 1999)
Rabbi Avigdor Miller Teshuva