In the Merit of Tzniyus 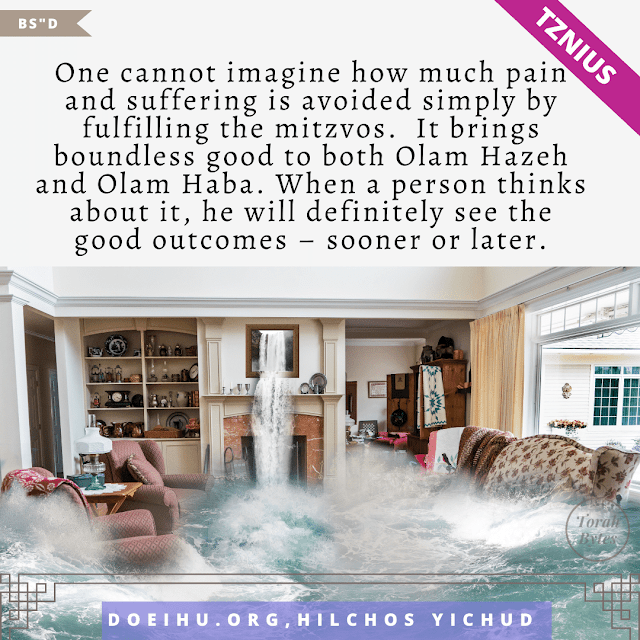 In the Merit of Tzniyus

The following story was related by R’ S.D.H.:

I wanted to take the opportunity to share a story that happened on Purim in 2019. This episode demonstrates clearly that when a Yid fulfills G-d’s will, he merits great rewards. One cannot imagine how much pain and suffering is avoided simply by fulfilling the mitzvos. It brings boundless good to both Olam Hazeh and Olam Haba. When a person thinks about it, he will definitely see the good outcomes – sooner or later.

I was in Boro Park for the chasunah of a close relative and was hosted by family a member. Since Purim was during the week of sheva brachos I was there all week, including Purim.

It was Purim afternoon when we left the house at approximately 2 o’clock to join my parents for the meal. We were not planning to return before nightfall, which meant that we would be out for a minimum of 5-6 hours.

On our way, we went to drop of mishloach manos at a friend’s house. Yet before we reached our destination, my wife realized that she what she was wearing compromised on tzniyus and was inappropriate to walk in the streets wearing, especially on a Yom Tov like Purim.

Being an ishah kesheira, my wife insisted that we must turn around, return to where we were staying so she could fix her appearance, and only then could we continue on our way. And so, we did.

As soon as we opened the door to the apartment, we stood back in horror. The entire room was flooded with water! It was evident that there was an open faucet and water was flowing freely, with no drain, for a while. We quickly stopped the flow, tried to gather the scattered items laying on the floor so they wouldn’t get ruined, and wiped up the place.

Had we come back late that night, as we had planned, the damage would be far greater. Our suitcases with all our things inside, the furniture, and more, were very close to being affected by the water. A few more hours, and there would be nothing to save.

Hashem protected us from the damage and stress, all in the merit of tzniyus. May we always go in the ways of Hashem, and in return be guarded by His wings with siyata dismaya in all our ways. (Haparshe L’maseh – Ki Seitzei)