I was one of the advisors on Rav Twersky's case and as a team, we were able to keep him stable for a while, but at some point his aged body stopped responding to treatment. The tzaddik was given every possible treatment and more. There were many highly experienced advisors experienced with all different protocols, and the person administering them had more experience than all of us combined. All proven treatments that had worked for others - failed. Baruch Dayan HaEmes.

How could this be? Countless people were helped by these treatments. If not one, another should work? Why such helplessness?

I have another question - a startling little question that begs to be addressed and may even give us a clue to the answer.

Isn't this flu season? What has happened to the flu? I have heard many suggest that we are calling the flu corona, but this is not the case. Not only are the symptoms vastly different, but the flu is a respiratory disorder and corona is a vascular disorder - that's why there is such a risk of blood clots with corona.

I decided to go to the website of the Misrad HaBriut and check to see how many people had the flu in 2020. After all, they keep records with German-like precision here in Israel, down to the flu strain.

The last recorded case of the flu was during the week ending January 11, 2020. When was the first case of corona diagnosed? February 21, 2020. You can look it up - its in the public record. Instead of the flu, people had started to get symptoms of corona at the end of January, but Israel did not yet have a way to test for it until the end of February.

So what happened to the flu? Is it possible that the corona virus destroyed the flu virus?

Let's stop to think a minute. We have all heard that the last generation before the geula will have the face of a dog. What does that mean?

There is a unique quality that a dog has - if you hit it with a stick, the dog will attack the stick. He doesn't understand that the stick has no power of its own. If he did, he would attack the one beating him with the stick. But instead, he atacks the stick.

We are now in a time of great darkness. It is so dark that we didn't even notice that Hashem took the flu from our midst. HE GAVE IT AND THEN HE TOOK IT AWAY.

That He gave us a magefa so huge that it seems to take on a life of its own.

No socializing, no cheder, no schools, no jobs, no income, no shul, no chasunahs, no funerals, and the great oxymoron of 'social distancing'.

In our desire to return to normalcy, we turned to the 'god' of Pfizer. The 'great vaccine' that is here to save us. And with more and more people taking the vaccine, greater and stronger strains of corona arrive.

Will we ever wake up and see that corona, the lockdowns, and the closed schools are just a stick? How low will we bow to the god of Pfizer for the salvation of its great vaccine? How long will it take us to wake up and recognize that Hashem is calling us to turn away from our false gods and our false notions and turn towards Him?

We have just finished reading about the makkos in Mitzrayim and how the waters parted freeing us and destroying our enemies in its wake. We sang Shira, and soon afterwards, there were grumblings.


We are at a crossroads now. A decision has to be made. Do we want to be like the ones who complain against Hashem in the midbar, or will we do what has to be done in order to work on internalizing our emunah?

I want to tell you an unbelievable story. I heard it first hand from the one that it happened to.

One of the people on the front lines saving lives was arrested because he sent his child to cheder. He spent the day in jail. He was responsible for caring for two patients in very serious near critical condition at home. The police took away his phone. He could not even contact anyone to check on these two patients. He pleaded with Hashem. He davened with such intensity that his whole body began to shake. "Please Hashem - let them live! Save them please!" All he could do was cry to Hashem from within the jail cell.

When he was finally released from jail he quickly called the first patient - the man told him "right about this time _ my body started shaking wildly, and then suddenly I started to vomit, and when it was all over, I felt like a new person!"

So he then called the second person and told him not to worry, he was on his way. When the man answered the phone he said "I am ok! At about this time _, I started feeling shakey and chills. Suddenly I started to vomit and now I feel better! I feel like a new person!"

What time did this happen to them? Both with the same story? Right at the time when the volunteer was trembling while storming the Heavens begging that Hashem should save them!

Its a true story! Why should we doubt it? I heard it first hand! He called me when he got off the phone with the second person and you should have heard the emotion in his voice.

We need to wake up and realize that HASHEM LOVES US! HE WANTS TO HELP US! But until we recognize that it is He Who is holding the stick we will remain lost!

Now is the time that we have to turn towards Him and lift up our hearts, our voices, and allow ourselves to feel the pain of our brethren! What does a child do when he wants to be picked up? He reaches up his arms and cries out to his parent! Reach out! Raise your arms to Shemayim! Call out! And dont stop until He picks us up! 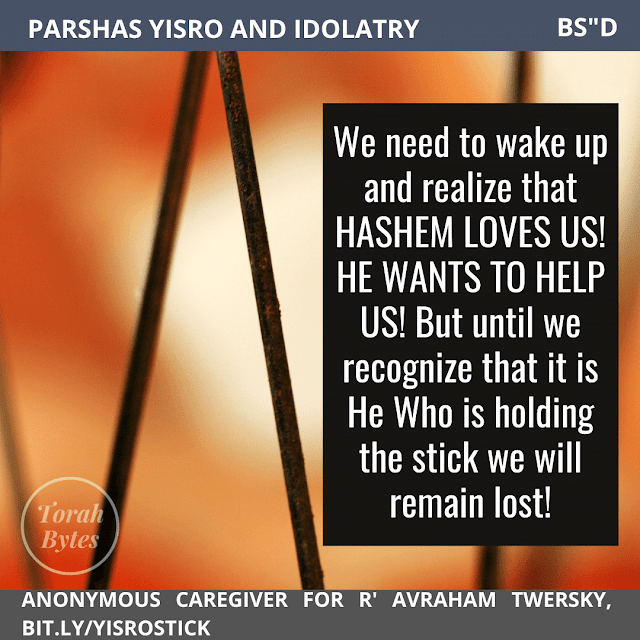