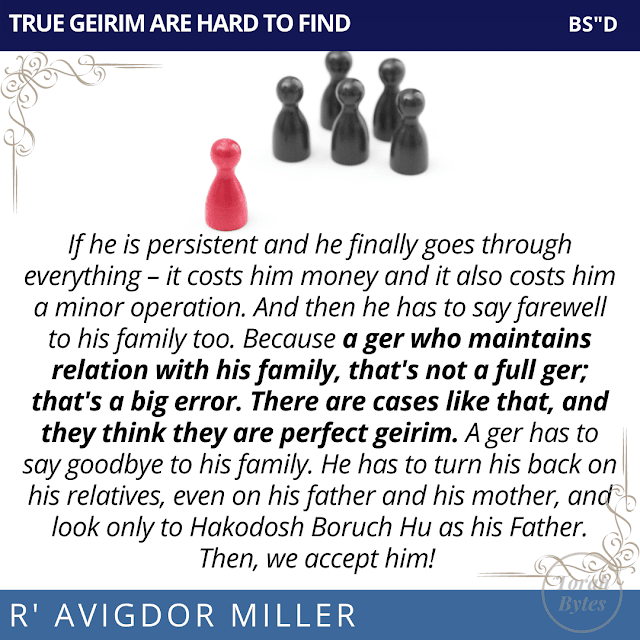 Q:
If a Jewish man is married to a gentile girl and she is interested in learning about yiddishkeit is it permissible to bring them to your home with the purpose of having her convert eventually?
A:
And the answer is we are not interested in converting gentiles. That's a fatal error. There’s no mitzvah to convert any gentiles. And although if that gentile would become a ger tzedek, a sincere convert, it’s a good thing – no question it’s a good thing – but to us it would be a bigger accomplishment if you could get him to break off with her. And if you can't, you shouldn't give any recognition to their relationship; you shouldn't sanction their union by inviting them together to your home.
Now I understand that this is against the trend of the times, but what can we do? The reason we are an eternal people is because we go against the trend of the times.
And I must commend the local sefardi kehillah. The local sefardi kehillah has a principle that they do not countenance any conversions at all – even with the best of intentions. And they are smart because we are a nation that can't afford to risk our franchise of living forever; it means playing around with extinction. And although if there is a righteous convert we welcome them here and they are welcome in most places, but we do not encourage the furtherance of proselytizing. Because that is not our business in this world; we are a chosen nation. Only if a person will be stubborn and insist on becoming a ger, so then we take him.
There's a ger who once came here; he was interested in converting. So we didn't encourage him but some time passed and finally he decided to become a ger. He came to me and he asked me, “What do I do?” I said, “You go to a rabbi who makes conversions.”
So he went and the rabbi told him “It’s going to cost you $300.” He almost hit the ceiling when he heard that because he had good intentions and three hundred dollars in those days was a small fortune. But I didn't raise a finger to help him. We have to make it as hard as possible in order to give him the acid test. There have been cases where I regretted that I encouraged gerim. Later I regretted it. And therefore you have to make it hard for him.
If he is persistent and he finally goes through everything – it costs him money and it also costs him a minor operation. And then he has to say farewell to his family too. Because a ger who maintains relation with his family, that's not a full ger; that's a big error. There are cases like that, and they think they are perfect geirim. A ger has to say goodbye to his family. He has to turn his back on his relatives, even on his father and his mother, and look only to Hakodosh Boruch Hu as his Father. Then, we accept him!
But we don't encourage it. That's not our business; we stand aloof. Hakodosh Boruch Hu is going to prosper us only because of that. The Reformers, because their ranks are dwindling, their children are intermarried are going lost, so they went out on a big campaign; they embarked on a campaign to bring in converts. You understand already what kind of converts they have. They are converted by a piece of paper; the converts don't have to do anything. Their purpose is to swell the ranks of the Reform Temple; but the end is extinction. They are headed to destruction. They won't last because of that – just because of that. It's only those Jews who are aloof form the nations of the world and don't encourage geirim, these are the ones who are going to persist – that's the Am Hashem.
TAPE # 259 (April 1979)
﻿#gertzedek﻿ ﻿#gerus﻿ ﻿#ravmiller﻿ ﻿#shavuos﻿
Converts Rabbi Avigdor Miller Ruth Shavuos