Holocaust and Clouds of Glory 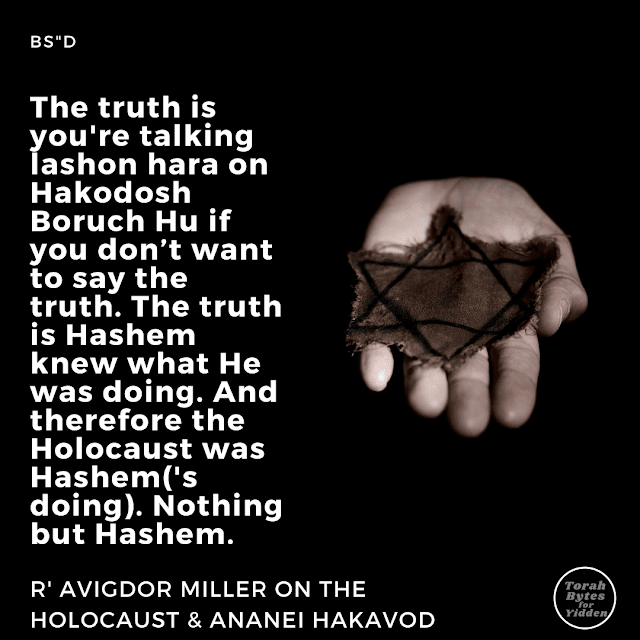 Rav Avigdor Miller on Clouds of Glory During the Holocaust

Q:
You spoke tonight about how one of the lessons of the sukkah is to remember the ananei kavod, the clouds of glory, that have protected the Am Yisroel throughout history. My question is, where were the ananei hakavod during the Holocaust?

A:
Question: Where were the ananei hakavod during the Holocaust?

I was in Europe two years before this happened. The Jewish newspapers were full of poison against frum Jews. There were hundreds of newspapers, daily newspapers, and all of them were enemies of the frum Jews. Only one newspaper was the frum newspaper, the Varshever Tageblatt. The Gerrer chassidim put it out. Only one newspaper. But all of Europe was blanketed in Yiddish and in Hebrew by newspapers that made leitzanus all the time of rabbanim, of kashrus, of taharas hamishpachah; they laughed at the shomrei mitzvos.

And the people began to be ruined by them; the Chafetz Chaim said that as a result of the newspapers, ein bayis asher ein sham meis. He said that. In every house there's at least one meis. The chadorim closed up. Big gymnasiums were built – secular schools. The youth went to schools now where the teachers were atheists and they were taught the opposite of Torah. The Jewish youth of the age of thirty and younger did not put on tefillin anymore. The majority didn't put on tefillin. So Hakodosh Boruch Hu said, “That's going to ruin my nation. I have to wipe it out. I have to make a new beginning someplace else; in America, in Eretz Yisroel, wherever it is.”

And therefore Hitler came. Hitler was a nobody; a wallpaper man, a paper hanger. How did he become a ruler over eighty million Germans?! It was a nes. He was a mushegener who had nothing to say. And the Germans all believed in law and order. If five years before the Holocaust you would have told a German that this would happen in Germany, he would have said absolutely not. He’d swear on the head of his child that such a thing could never happen in our country. The Holocaust was a miracle from beginning to end.

Instead of using their trains to ship soldiers to the front, the same trains that were needed for the army, the Germans used them to send Jews to the extinction camps. That was a suicide act. They were harming themselves. They needed all those trains for the troops; but they didn't care. They preferred to use the trains to bring Jews to the extermination centers. The whole thing was a miracle. The whole thing was a nes from the beginning to the end.

Of course, the world, the Jewish world, didn't want to learn anything. They say, “We don't know why it happened. It's a mystery.” If you were there you’d know that it’s no mystery at all.

So somebody said, are you making the Germans tzadikim?! They're doing the ratzon Hashem?!

You have to know that when a murderer kills a person, he couldn't kill him on his own. It's Hashem who decrees on Rosh Hashanah and Yom Kippur this person must be killed. You can't kill a person because you wanted to. It's Hashem's decree. And still the murderer is put to death anyhow. He's a murderer anyhow.

So the Germans deserve that we should kill millions of Germans out of revenge. Millions of Germans should be killed for what they did but that had nothing to do with the idea that Hashem was the One who caused it all. And therefore where was Hashem during the Holocaust? He was right there, and He was doing everything.