Q:
What should we think when we see the holiday lights and decorations of the goyishe holidays at this time of year?

A:
What should we say or think when we see the gentiles celebrating their religious holiday?

We should say, “אשרי העם שככה לו – How lucky we are that we’re not gentiles!”

There is a whole civilization that is living on lies; not only lies – stupid lies.  It’s so silly.  And they all quote Yeshaya (7:14), הנה העלמה הרה ויולדת בן – Behold a young woman is pregnant and she will give birth to a son.  It doesn’t say besula, virgin. Alma in lashon kodesh means ‘a young woman.’ Who else should have children if not a young woman?  Old women can’t have children.  The navi is talking to Achaz and he’s telling him that he will soon be rid of his enemies. “A young woman is pregnant,” the navi said; he’s talking about the wife of Achaz, “and before this child will be old enough to know the difference between good and bad, you Achaz are going to be rid of your two enemies, Retzin and Pekech ben Remalyahu.”

Now was that child born of a virgin then? It was the wife of Achaz. She gave birth a few months later. And that’s what happened.  Retzin and Pekech ben Remalyahu had a mapalah before the baby was born.

What a stupid sheker!  They’re using this stupid lie, that she was a virgin, as a mashal for their Yoshkoh who was born 600 years later.  It’s so stupid!  Right away you see it’s foolish!  A pity!  A whole world is misled with cathedrals and churches and religions, all kinds of sects.  And it’s based on nothing.  It’s a world of sheker.

That’s why the possuk says, תשת חשך ויהי לילה – You make darkness and this world becomes a night. And the sages say it’s talking about this world: זה העולם הזה הדומה ללילה – This world is like a night of darkness, a night of error.  The whole world is steeped in this shtus, the foolishness.

So what else could we say when we see the celebration of such shtusim? “Boruch Hashem that Hakodosh Boruch Hu has rescued us from this flood of ignorance!” And therefore, as you pass the streets you have to say, “אשרי העם שה' אלקיו – Happy is the nation that Hashem of truth is their G-d.” 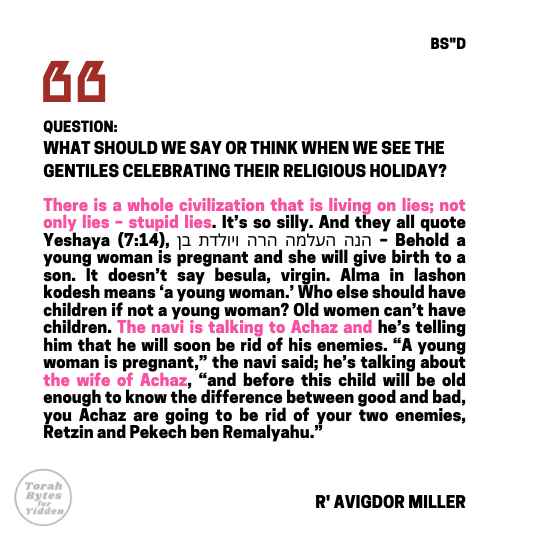 According to Radak and most meforshim, Achaz had a very young wife who was a tzaedekes and had not yet become pregnant. Yeshaya is announcing that she was, in fact pregnant now. ~Rav Schwab on YEshayahu 7:14

So the real meaning of this is that Yeshaya announces that the king's young wife would give birth to a child, and that she would call him Emanu-el. This very young woman was one of the righteous people who still lived in YErusahalayim. She would be inspired to call her child "G-d is with us", just as Yeshaya had called his, Sh'ar Yashuv, "The remnant will return." It was int he merit of these and similar tzadikim that Yerushalayim was saved from the impending attack by the unholy alliance of the armies of Pekach, the king of Malchus Yisroel, and Retzin, the king of Syria.

This child of Achaz, Emanu-el, is not identical with Chizkiyahu, because Achaz reigned for only 16 years, and Chizkiyahu was 25 yo when he succeeded him after his death. So Chizkiyahu was born well before Achaz ascended the throne. (See Rashi here and Melachim Beis 18:2).